In between raising six kids, thwarting carjackers (more on that later), and working full time, widowed father Alphur Willock (who goes by “Slim”) has somehow found time to take advantage of work-based degree programs. Recently, he completed a B.S. in computer science from Pace University, a Council for Adult and Experiential Learning (CAEL) institutional member. It was just the latest step in a learning journey that intertwines career and coursework.

Twenty-six years ago, Slim was working as a security guard. He had taken the job while completing his associate of arts degree. While on the job Slim had regular interaction with employees of the New York Telephone Company (now Verizon), who worked in the same building.

“They would always see me studying and suggested I should take the employment test,” says Slim. He took their advice, and after passing the test he joined the company as an operator for directory assistance. This decision would turn out to play a chance role in launching a different career path, one that has allowed him to pursue two of his passions: learning and interacting with people from all walks of life.

Slim soon learned about an educational benefit offered through Next Step, a partnership among the company, Communications Workers of America, and a community college. Participants earn an associate degree and can become telecommunications technical associates. The company provided the student employees a laptop, scientific calculator, and time off to attend the once-per-week classes. Employees who completed the program had the opportunity to receive an increase in pay and responsibilities.

Not surprisingly, the opportunity was popular. “At first I couldn’t get in because I didn’t have the seniority the ‘dinosaurs’ had,” recalls Slim, referring to veteran employees who entered the program ahead of him. Eventually, a slot opened. With the help of PLA credit, Slim earned his second associate degree, this one an associate of science, in 2009.

Slim relished his accomplishments, but he still had, as he described it, a “yearning for higher learning.” One of his coworkers mentioned an educational opportunity made possible through NACTEL (the National Alliance for Communication, Technology, Education and Learning).

Dedicated to serving the online education and training needs of the telecommunications industry, NACTEL includes among its member organizations major telecom companies and industry unions. Pace University is NACTEL’s education partner, and CAEL serves as the organization’s program administrator and project manager.

Under the program, employee tuition was covered. Intrigued, Slim prepared to pursue a Bachelor of Science degree.

In 2011, Slim’s wife, Dawn, died just a week after giving birth to their newest son. “We always talked about what we’d do if something happened, but you never think anything is going to happen,” says Slim. “No matter how prepared you might feel, you’re not prepared.”

He recalls sitting in a chair at his house, where well-wishers had gathered after the funeral. “People were asking each other, right in front of me, how I’d be able to take care of the kids by myself,” he remembers. “At that moment, I wondered the same.”

He had to adjust quickly to the new normal of his daily life. “I realized how much she really did, and she was working full time, too,” he says. “I wondered how I’d raise my young kids and still go to work and provide for them. There were lots of questionable moments.”

But those anxious moments quickly became a source of determination. “I was going to raise the kids how Dawn wanted them to be raised,” Slim resolved. That would include persisting in his lifelong commitment to personal and professional improvement.

Ultimately, Slim enrolled in the NACTEL program in 2013. Despite his extensive prior postsecondary classwork, this would be his first online learning experience. He says it took some time getting used to the asynchronous format’s lack of instant feedback. But he quickly appreciated the increased flexibility.

“I could be reading a chapter in a book while cooking, and writing a report while doing the laundry,” he says. “I was adjusting my life to the new normal, so it came right in time so I could still pursue education. Faculty, staff – everyone at Pace showed so much love.”

Thanks to his hard work and the support from Pace faculty, Verizon, his union (Local 1106), and his family, Slim received his Bachelor of Science in Information Systems in December 2019. He was further honored with the Founder’s Award, which Pace and NACTEL annually confer on a graduate who has demonstrated a passion for lifelong learning and exemplified the spirit of innovation that is a hallmark of the NACTEL program. Like so many students around the country this season, Slim’s graduation took place virtually because of the COVID-19 pandemic. The traditional ceremonies, which were to have taken place at Radio City Music Hall, are on hold.

But this was not the first time Slim’s life had been impacted by the pandemic. He has been on the front lines of the telecom industry’s support of the fight against it. In April, he was part of a Verizon team that assisted the arrival of the USNS Comfort, a Navy hospital ship dispatched to New York to reinforce local health care resources. After a vigorous screening process, the team spent a day working with the ship’s network personnel. They merged communications lines and ensured all fiber optic connections were working before the ship’s local mission began. 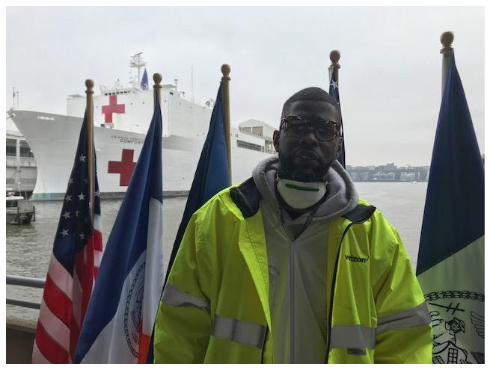 To support corporate communications and employee engagement, which are among the additional duties he’s taken on as his career has progressed, Slim also documented the team’s experience, helping get the word out to fellow employees and the community.

Raising awareness was important, Slim says, because people are overlooking the contributions of telecom workers. “No one is talking about them being essential,” he says, even as more and more people are working from home and distance learning. “Telecom workers can be superheroes, too. People only know it if their service is cut off.”

Whether people know it or not, Slim finds himself playing the role of hero a lot. Most importantly, for his children, who are now between the ages of 9 and 23.

But he also appreciates the daily opportunity to make a difference at work. “I like having conversations with all walks of life, solving problems,” he says, noting that he and his colleagues often receive a hero’s welcome when arriving to solve issues.

When it comes to playing hero, perhaps his most unlikely role occurred when someone drove off in his work van. “It happened so quickly, I thought it was a prank or that I had left it in drive,” recalls Slim. “I sprinted after it to find out what was going on.”

Catching up to the vehicle at a traffic light, Slim, who stands six feet, six inches tall, was met with a hurried apology from the perp, who then jumped from the vehicle and bolted from the scene. Slim went to the local police precinct to report the incident.

Ironically, it was a telecom device that ultimately sealed the carjacker’s fate. “He had left his phone in my truck,” says Slim. Detectives were able to track him down by dialing his contacts.

Fortunately, most of his days are calmer – or as calm as a day can be for a single dad of six. When people applaud his accomplishments, Slim responds that no one knows what they can do until they put their mind to it.

“If I can do it with six kids running around, I know you can do it, too,” he tells them. Then he shows them a pocket-sized diploma for his Pace University bachelor’s degree he carries with him.

More than 25 years on at Verizon, “Now I’m the ‘dinosaur,’” he says. “There are people who want to get in the NACTEL program right now when I show them that.”

Sometimes, Slim looks back on his first diploma. It’s hanging on his wall. Inside the frame is a photo of his grandmother and mother with him at his Queensborough Community College graduation. “Seeing how happy they were, that was my incentive to keep learning,” he said.

And that’s just what he plans to do. He is thinking of returning to Pace for a master’s degree. When he does, his children will be cheering him on. “They go to school, too,” he says. “They totally understand.”