Learner of the Year Alphur Willock (who goes by "Slim") knows that learning is a two-way street with many lanes and even more intersections. Sure, there may be a few collisions along the way. But with perseverance and, ideally, some help navigating, the journey of lifelong learning is punctuated by pathways that are personally and professionally fulfilling.

Now try getting that across to high schoolers. That's just what Slim did when he presented during a career day event in April at People's Prep, an independent charter school in Newark, New Jersey. To stress his overarching message, he quoted Thomas Edison. "Many of life's failures are people who did not realize how close they were to success when they gave up."

A widowed father who raised six kids while working full time and completing multiple degrees, Slim understands the daunting difficulty as well as the profound potential of braving the odds. He also knows what it's like to get glib advice during challenging times. So he was determined to connect with the students on a meaningful level.

"When I was growing up, I didn't find high school one of my favorite places," he said. "I knew that when I stepped in that room, I was going to be there with somebody that felt the same way."

A 28-year employee of Verizon and member of Communications Workers of America (both organizations are NACTEL members), Slim still remembers that feeling well. "A lot of times these kids believe 'Nobody can tell me anything, I don't care what you say, I can make my own decisions,'" he said. "When I was just coming into the company, I didn't want to listen to the 'dinosaurs' either, because I thought I already knew it. But guess what? How the dinosaurs have been working for the past 25 to 30 years is a totally different thing.”

Despite -- or perhaps because of -- the major challenges he faced in his own life, Slim has come to recognize that sometimes seemingly minor gestures can make a big difference. It was the encouragement he got years ago from mentors – those so-called dinosaurs – that led him to pursue learning pathways available through Verizon education benefits, which began with an associate degree and continued with a NACTEL-integrated bachelor's degree. (He is currently working on a master of science in information technology degree that is also incorporated within the NACTEL program, a CAEL industry-education initiative.)

So when Slim happened to meet a representative of People's Prep at a Verizon "Adopt a Unit" event, which organizes goods for shipment to troops serving abroad, he readily agreed to be a speaker for its career day event. "Everything is 360," he said. "Because it's a school focused on postsecondary completion, I knew that talking about college was a way for me to give back."

He admits it wasn't all giving. "I was so struck and taken aback by how smart and intelligent these kids are," he said. "They're looking at me for advice, and I'm sitting there like a sponge, learning at the same time. One of the students said he wanted to be a teacher, so I told him to get up there and lead things for a while, and he blew me away. It was almost that he had forgotten that he was a student. These kids have such promise, and it's unfortunate that many of them will face obstacles that deter them from achieving their full potential.”

To help the students see that promise in themselves, Slim had them complete an aspirational planning template he designed for the class. "I stressed the importance of self love," he said. "I had the kids go over the outline, and I had them pick out what hit home with them, what resonated inside them. Some of the kids did amazing artwork, and nobody knew they'd had this talent. I was amazed by that and the questions they were asking. You're never too old to learn and never too young to teach." 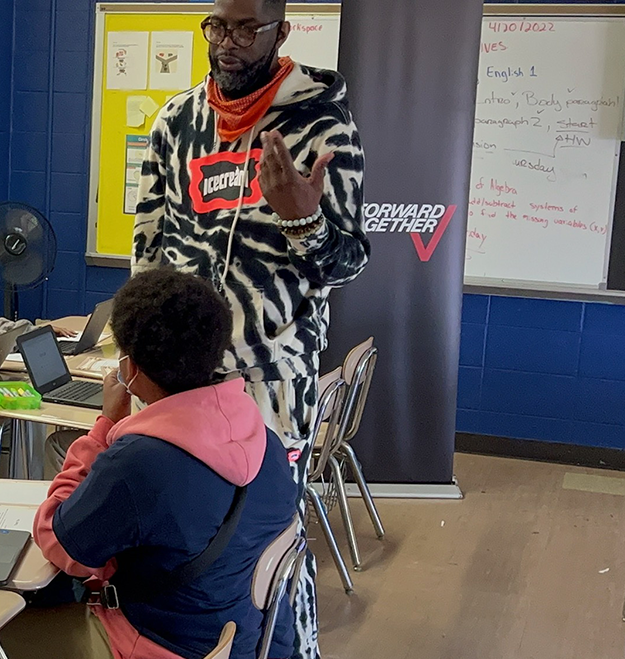 The students also shared the challenges they were facing, often pulling Slim aside after class to relate their personal circumstances. "They get great support at school, at events like career day," he said. "But a lot of these kids come from broken homes. As soon as you go out and you're in the neighborhood, it's not a promising environment. It's not a neighborhood where they're uplifting people to go to school. Sometimes, they have to walk through a gauntlet to get to the school where they can talk about college."

Although he knew the message might be a tough sell, Slim encouraged students to persist and remain committed to the best versions of themselves they had been asked to imagine in the worksheets he had handed out. "I wanted them to think about not just college but a career, because they have to go hand in hand. When I was first getting a job, I wasn't thinking about something that could pay for my tuition. I wasn't even thinking about a career. But without one, I wouldn't be here talking about getting an undergraduate and then a graduate degree."

Slim also knew it can be difficult for high schoolers to conceptualize a clear career path, let alone a rewarding one. To help students weigh their options, he encouraged them to sketch out a five-year plan.

He acknowledged that even that shorter time frame can be challenging, even for students who have a firm decision about what to study. "Five years puts them in their early 20s," he said, noting that by the time many of the students' friends and family members had reached that age, crises had made college a distant dream.

Slim warned the students about letting others' negativity cast a shadow on their own aspirations, a phenomenon not limited to the high school years. "No matter how old you get, naysayers will still be around," Slim said. "Ignore them, seize the moment, and don't be afraid to fail."

One of those seizable moments may turn out to be far from fleeting. Slim presented the so-called “great resignation” as a potential boon for soon-to-graduate high schoolers. "Whatever you're going to study, most likely you're going to find opportunities in connected career pathways, because so many industries are struggling to fill positions."

But even when learning and work are well aligned within career pathways, there is a cost to traveling them. Many of the students had concerns about how to finance college. Just as he'd been encouraged to do when he began his career, Slim urged them to explore employee education benefits.

Not every job comes with such perks, let alone a robust program like NACTEL’s, which enjoys both union and corporate support within the high-growth telecommunications sector. The good news is that they are becoming more common as evidence of their positive impact continues to emerge. For companies, these include reduced attrition, more effective recruiting, and even greater productivity. By creating new pathways to college completion and career advancement for underserved students and employees, they can also support workplace diversification strategies.

These new pathways don't just open up possibilities for young students first entering the workforce. They also create a framework of continual learning that workers need to sustain a rewarding career through to retirement -- a milestone Slim will soon be eligible for thanks in no small part to what once seemed like ancient wisdom.

"I remember when I first started, we laughed at the dinosaurs," he said. "Now, I'm one of them."

For Slim, assuming the "old" role within the cycle is a new opportunity to pay it forward. He didn't have to wait long for the next one. Less than a month after the career day, Slim participated in a resume workshop at the same high school.

He’s honored to be in the position of being able to continue giving back, and he again points back to his own beginning. “If it weren’t for Verizon and NACTEL, I wouldn’t be in that position. With the combined knowledge from Verizon and Pace University, I’ve been able to stay at the forefront of the digital transformation.”